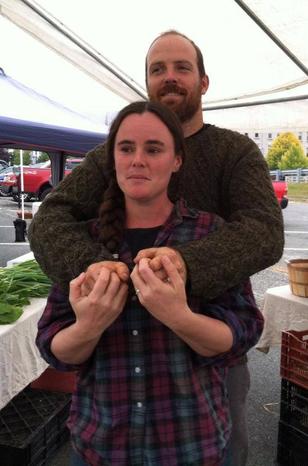 We are Michael Gallagher and Ashley Amsden, and we've been operating Square Roots Farm since 2010.

Michael, a Berkshire County native, grew up in Cheshire and got his first taste of farming while baling hay over the summer in high school.  After graduating from Williams College and teaching math for a couple of years in the Mississippi delta with the Mississippi Teacher Corps, he turned his attention to agriculture. He spent two years apprenticing on diversified, organic farms in New York and Vermont, before returning to the Berkshires to start Square Roots Farm.

Ashley is a transplant from Vermont’s Champlain Valley. After earning a degree in music and spending a couple of years traveling around the country doing trail work and environmental ed, her path crossed Michael’s when they spent a summer together as farm apprentices in 2009. She earned her Master’s in Elementary Education from Antioch University New England and taught 5th grade here in North Berkshire County for a few years before transitioning to full time on the farm in 2014.

Our lives intersected during our apprenticeships at Maple Wind Farm in Huntington, VT. Michael was gleaning what knowledge he could while looking for land of his own, and Ashley was exploring the cross-section of agriculture and education before heading to graduate school. Living in a picturesque yurt on top of a hill there, we decided that we ought to dive into the next adventure together. Michael found some land the following winter while Ashley was hard at work in school, and we started Square Roots Farm that spring with 30 CSA shares, some feeder pigs, and a bunch of meat chickens. In 2013, we purchased the old Fletcher Farm from Berkshire Natural Resources Council, land just two miles from Michael's childhood home, and we were married here on the farm later that year. We continue to farm joyfully on these 185 beautiful and diverse acres of our very own with our two children, Maggie and Everett.